Here are a couple more cards that I made over the weekend.  They're a little dull after the crisp and bright cards that I posted the last couple days. I was originally only going to use the Washi tape on the first one to hold the little banners temporarily but decided to leave it, however it lifted up a bit after a couple hours so I needed to use additional adhesive.

My daughter gave me the little thinking of you wood shapes last year for Christmas and I managed to hoard them for a year so figured it was time to use them.   The paper on this one is from a My Mind's Eye 6 x 6 pad. 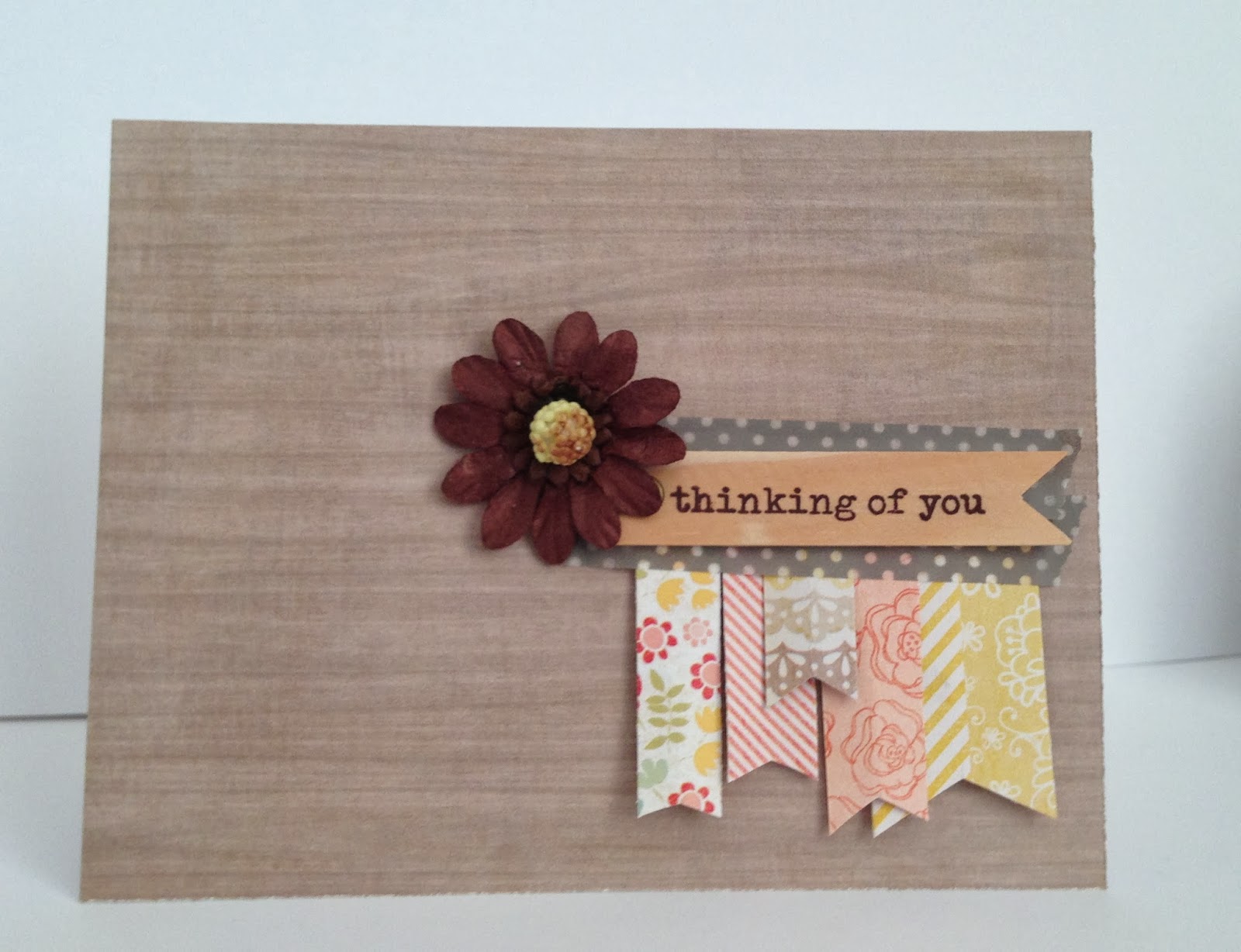 This was a Thanksgiving card, but I swiped the embellishment off of it to use on a scrapbook page instead.  So, this nice little card base had some possibilities but I didn't do so well on it.  I had to be sure and cover up the spots that were damaged and I was running out of time so I was only grabbing things (you guessed it off my desk).  It clearly still needed something….. 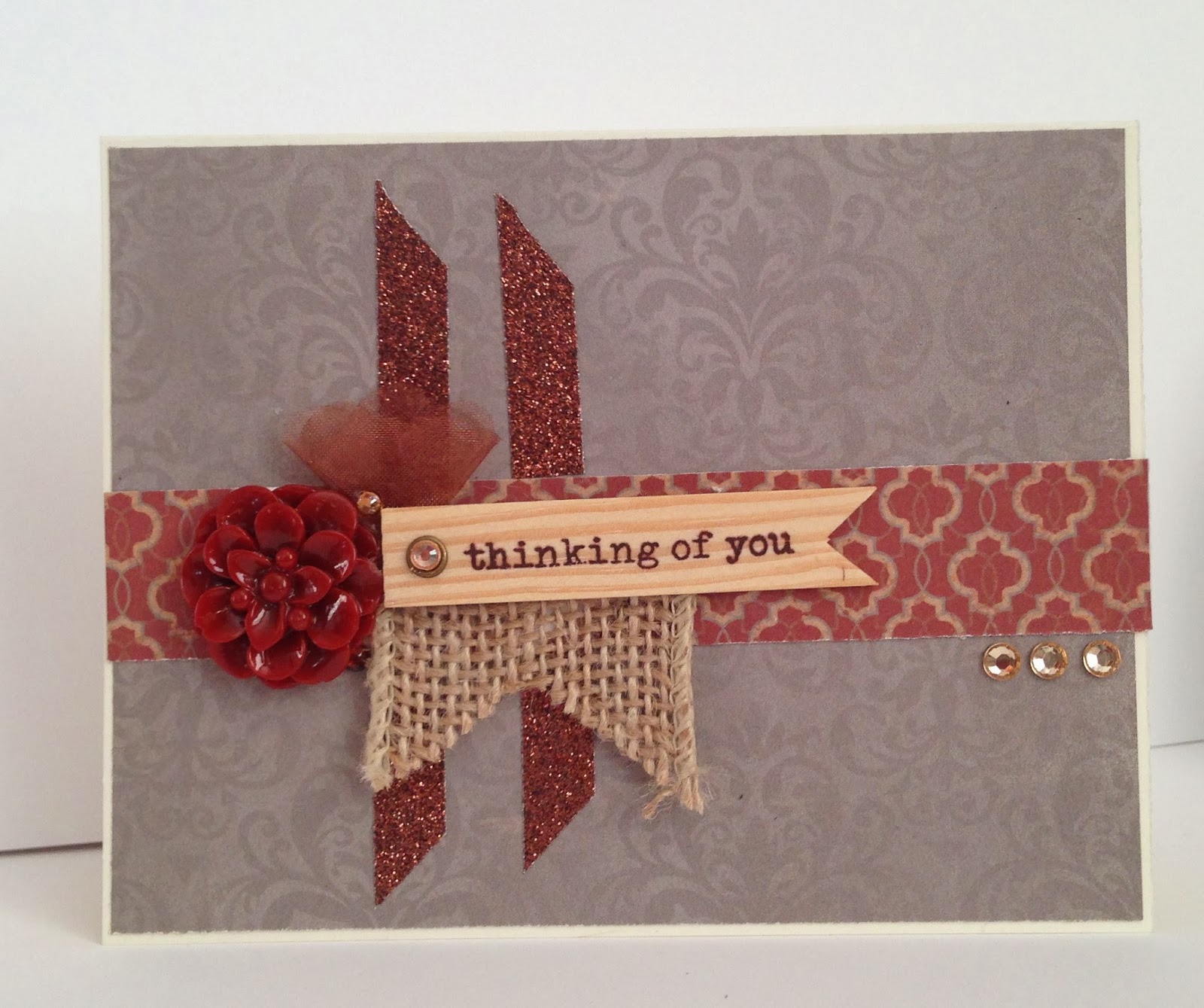 So I resorted to garbage picking….and pulled out the packaging from the Jillibean Soup wood shapes then cut the little bracket out - I think it helps but not a card I would write home about.  By the time I took this photo it was later/darker so at least you can see the warmth of the colors better.  The paper is CTMH Huntington….yet another paper kit that will be discontinued at the end of this month. Can you tell it's time for the new catalog?? 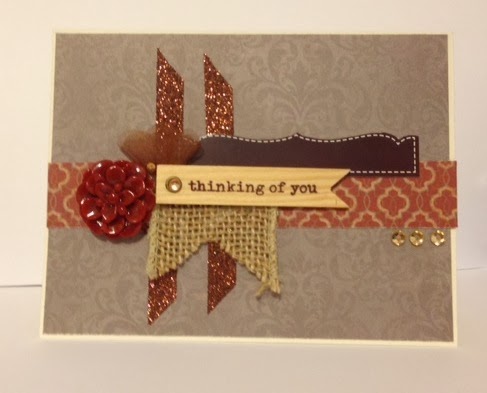 This Freshly Made Sketches #117 was an EXTREMELY fun sketch, I'm certain that I will be doing a lot more using this sketch.  I used a Cloud Nine stamp again; it's this month's special Close to My Heart kit.  Cloud Nine is only available this month with a qualifying purchase. This is also the last month to order Chantilly paper and coordinating supplies from the winter catalog. 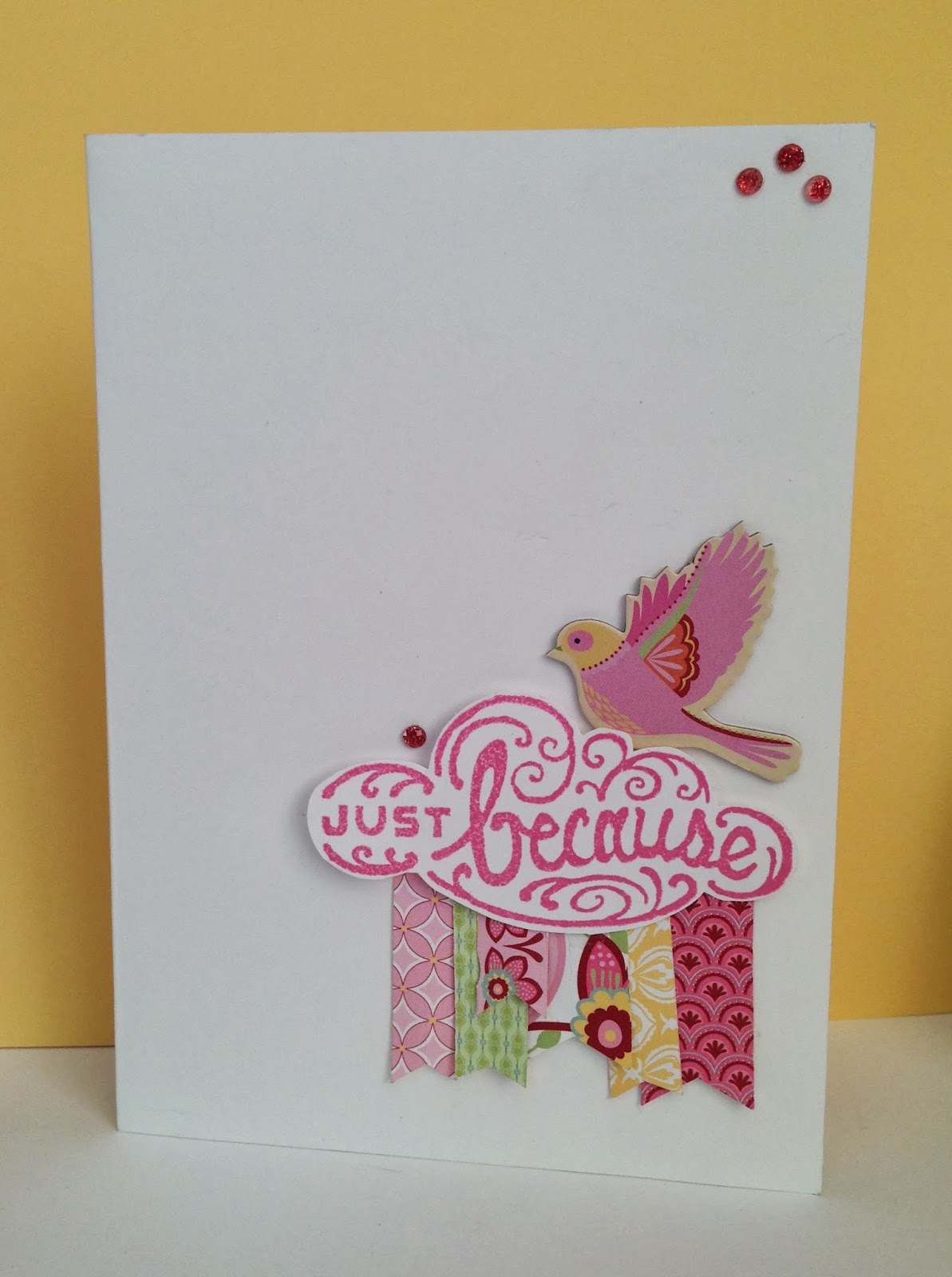 I don't know what the deal is with me lately but I keep rushing I guess and leaving out details from sketches.  I knew this card needed something, then I took a look at the sketch again and added the extra layer….much better don't you think? 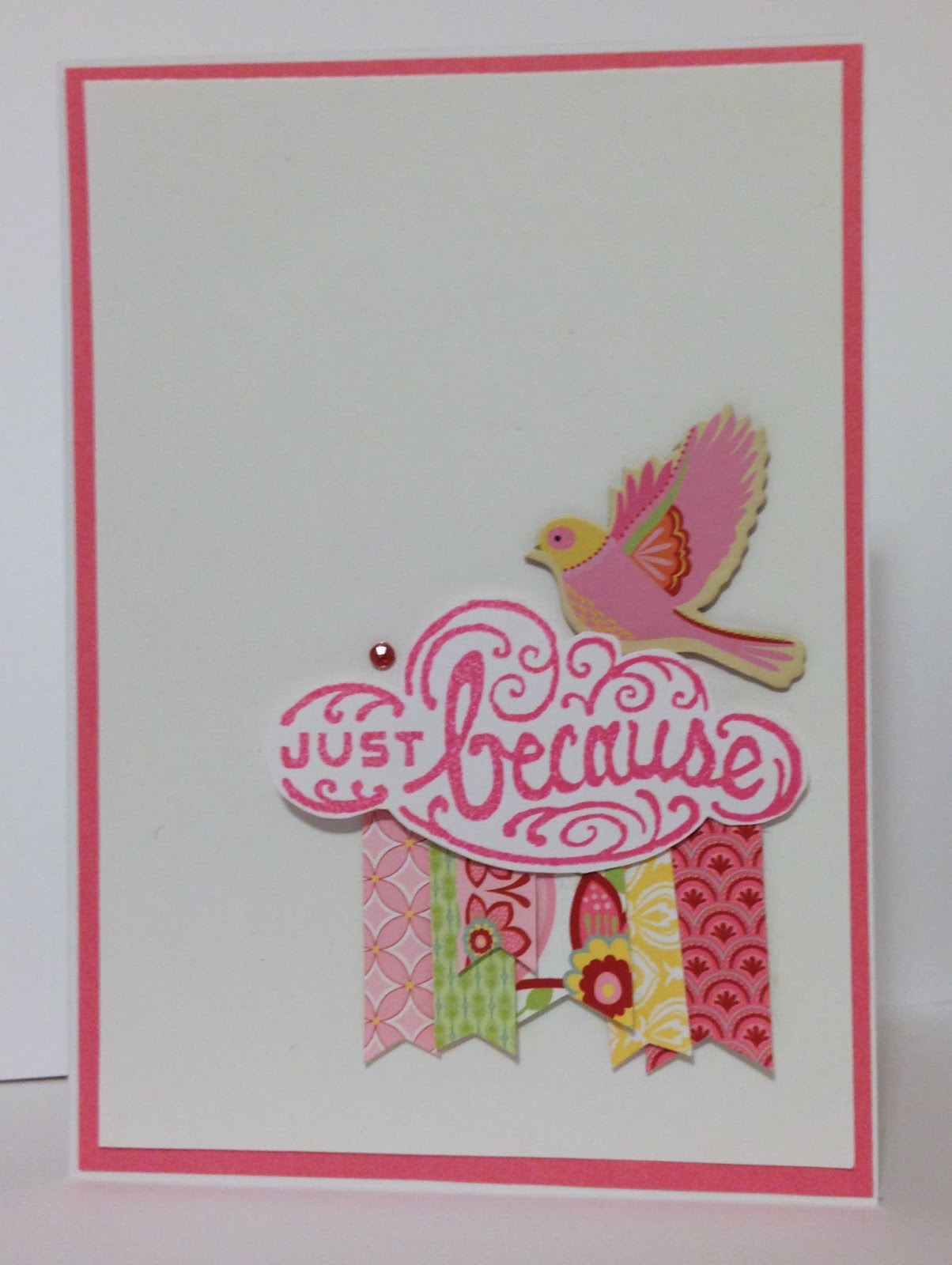 More goodies from yesterday's playtime using CTMH Cloud Nine stamps.  This card I made for Color Throwdown #273 and Retro Sketches #96. 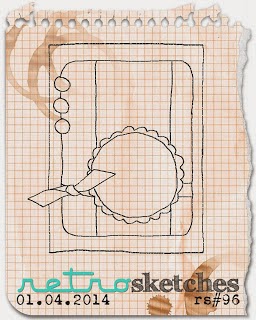 I think that one of the best parts of doing a color challenge is collecting the little batch of goodies that you think you need or might use for your project. A little chocolate always helps :o) 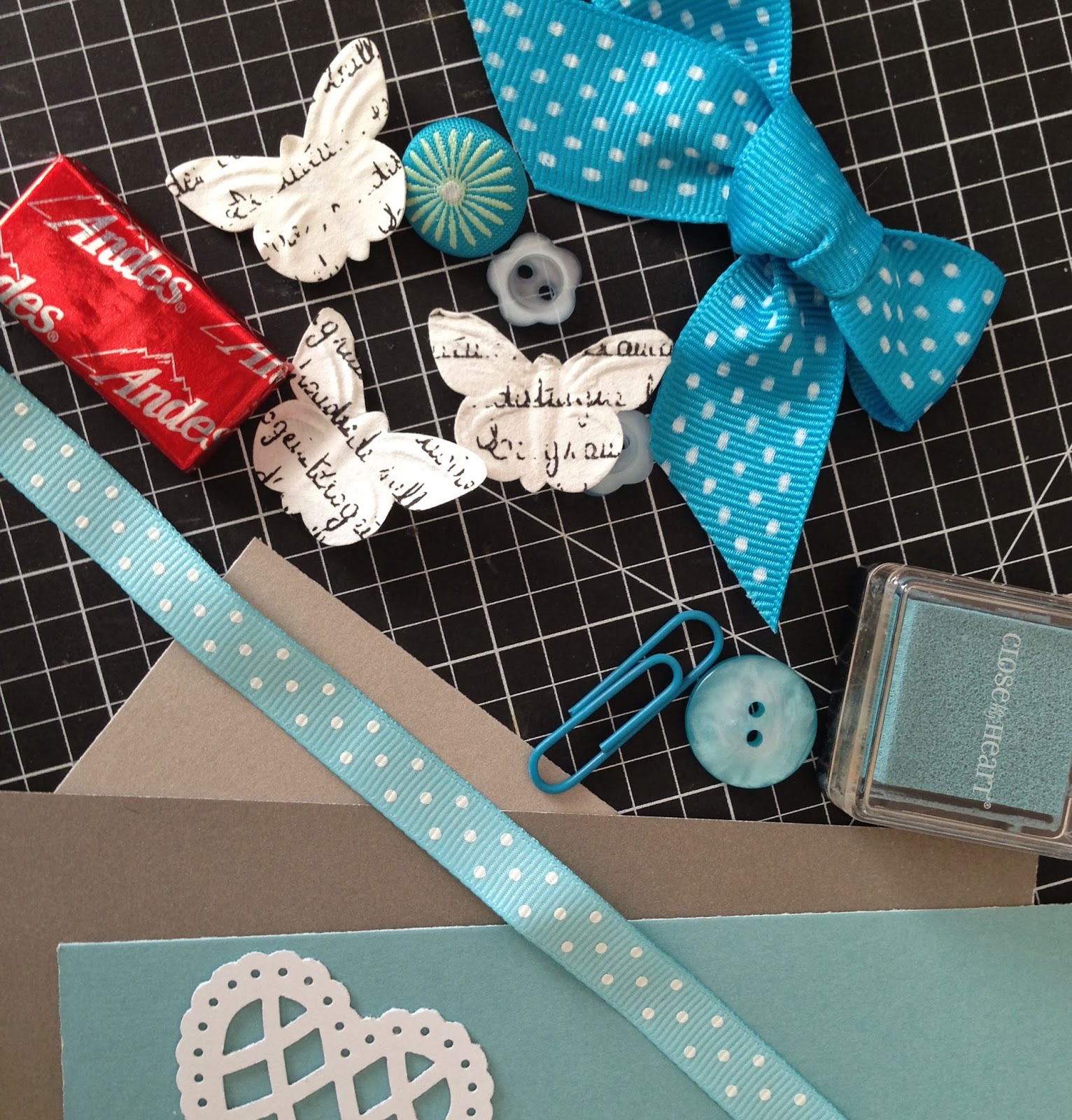 Since I only wanted a tiny silver border I decided it would be a good idea to punch a few shapes. 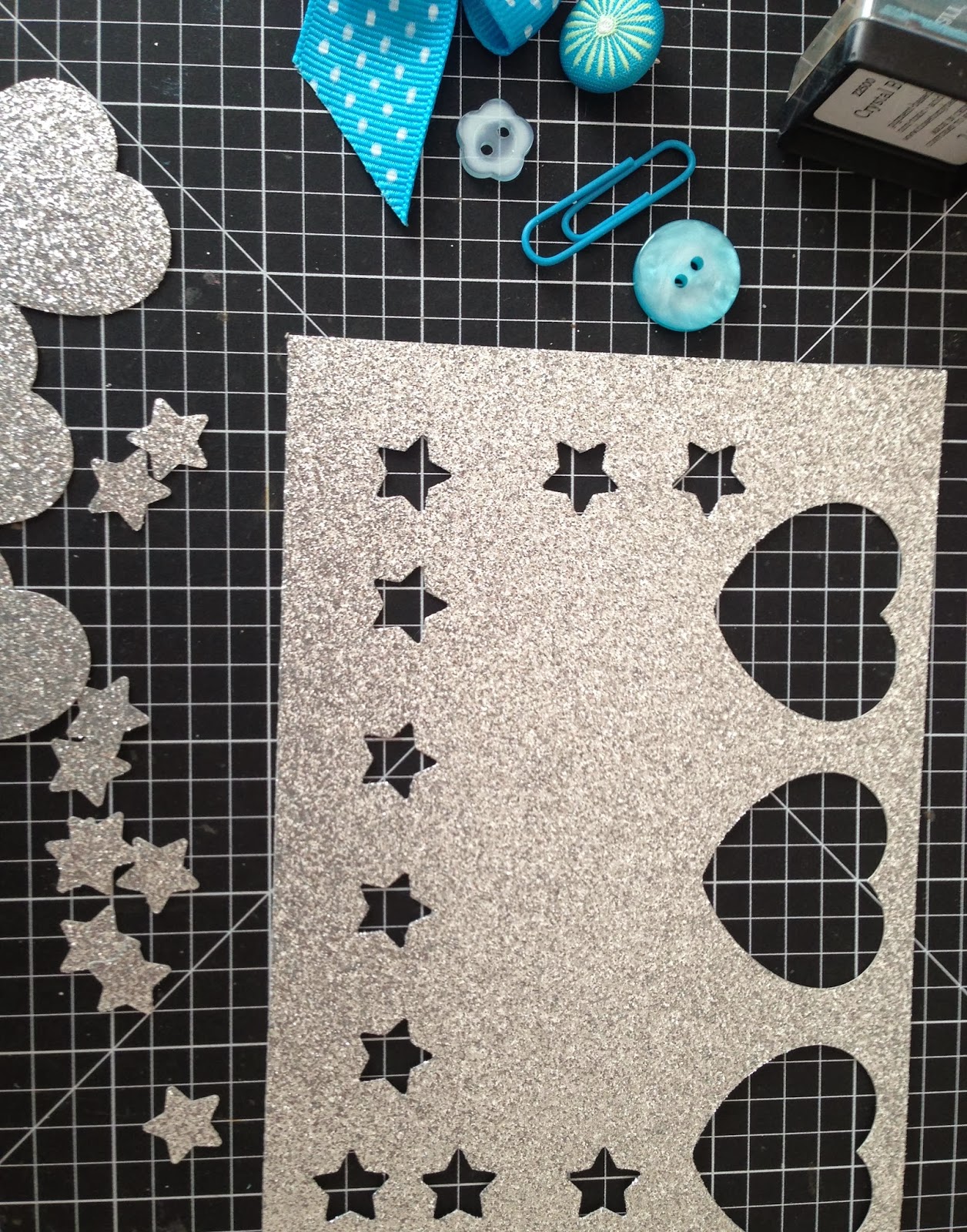 It's wonderful how the glitter stays on Close to My Heart glitter paper so well.  I used a Martha Stewart punch for the scalloped heart. I cut the bow just as it is off of a stuffed dog that I sent my grandson last Easter - I thought he would think it was too girly. 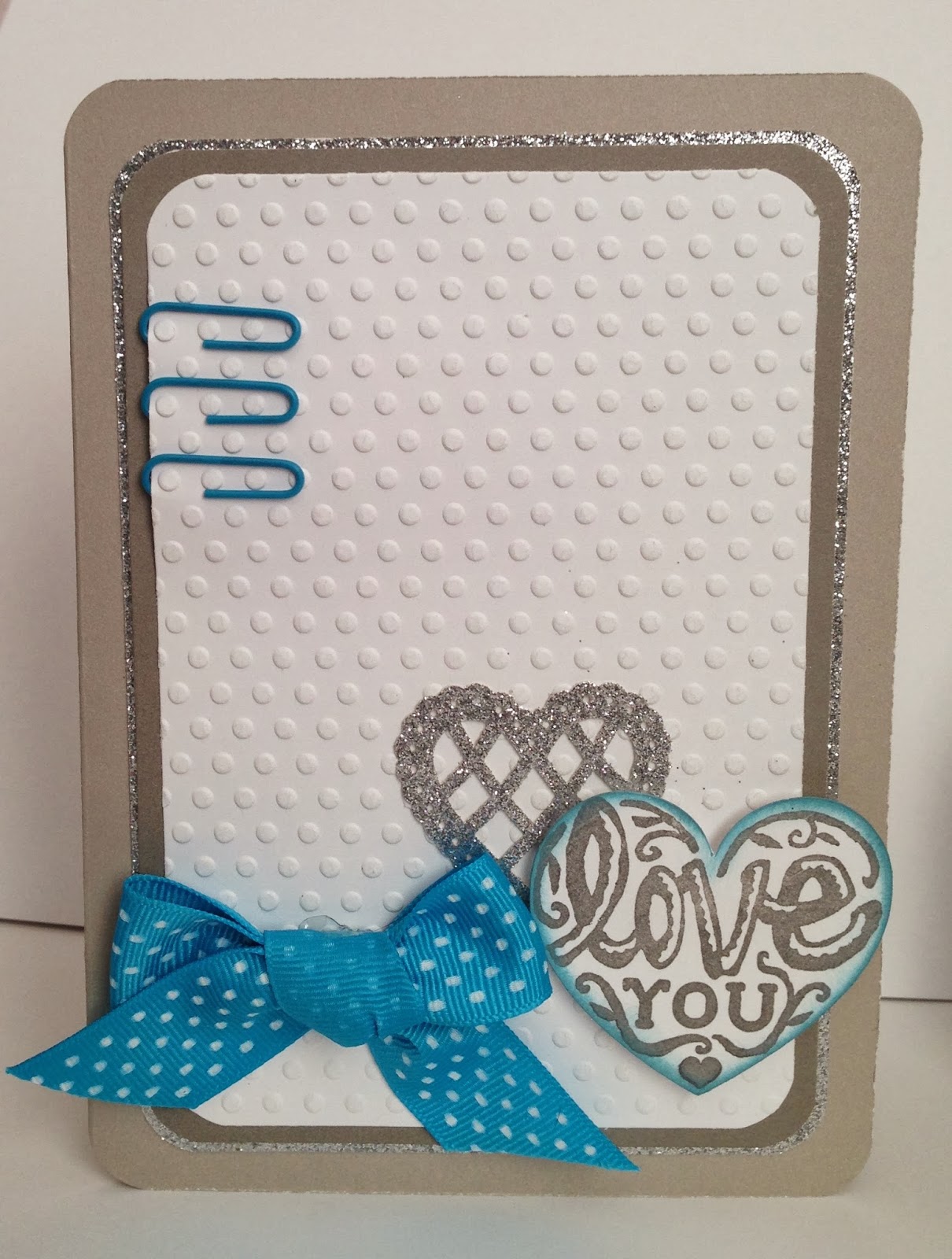 I had lots of fun creating today….here's what I did to play along with Mojo Monday 326 and Dynamic Duos 85. 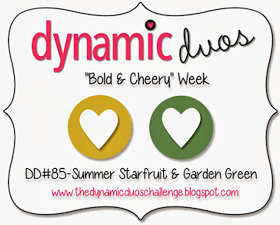 First step was to gather some fun things that just happened to be on my table - yes there's way too much on my table these days,  I barely have room to work but I just hate to stop playing to pick up. 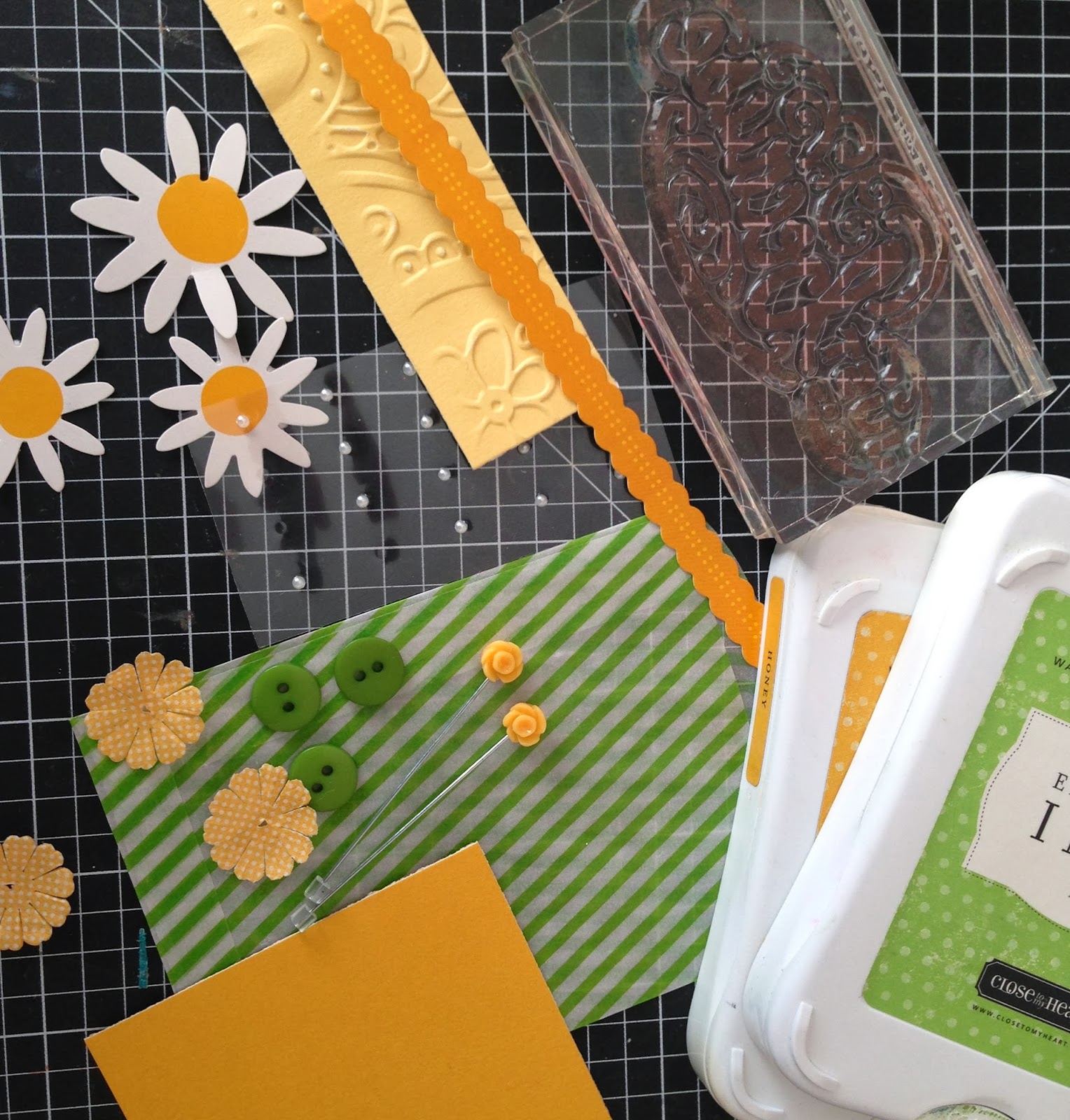 My Cloud Nine stamps were of course still on my table so that's what I used.  Close to My Heart Honey and Pear ink was perfect (these I'm proud to say are two things that were put away where they belong). 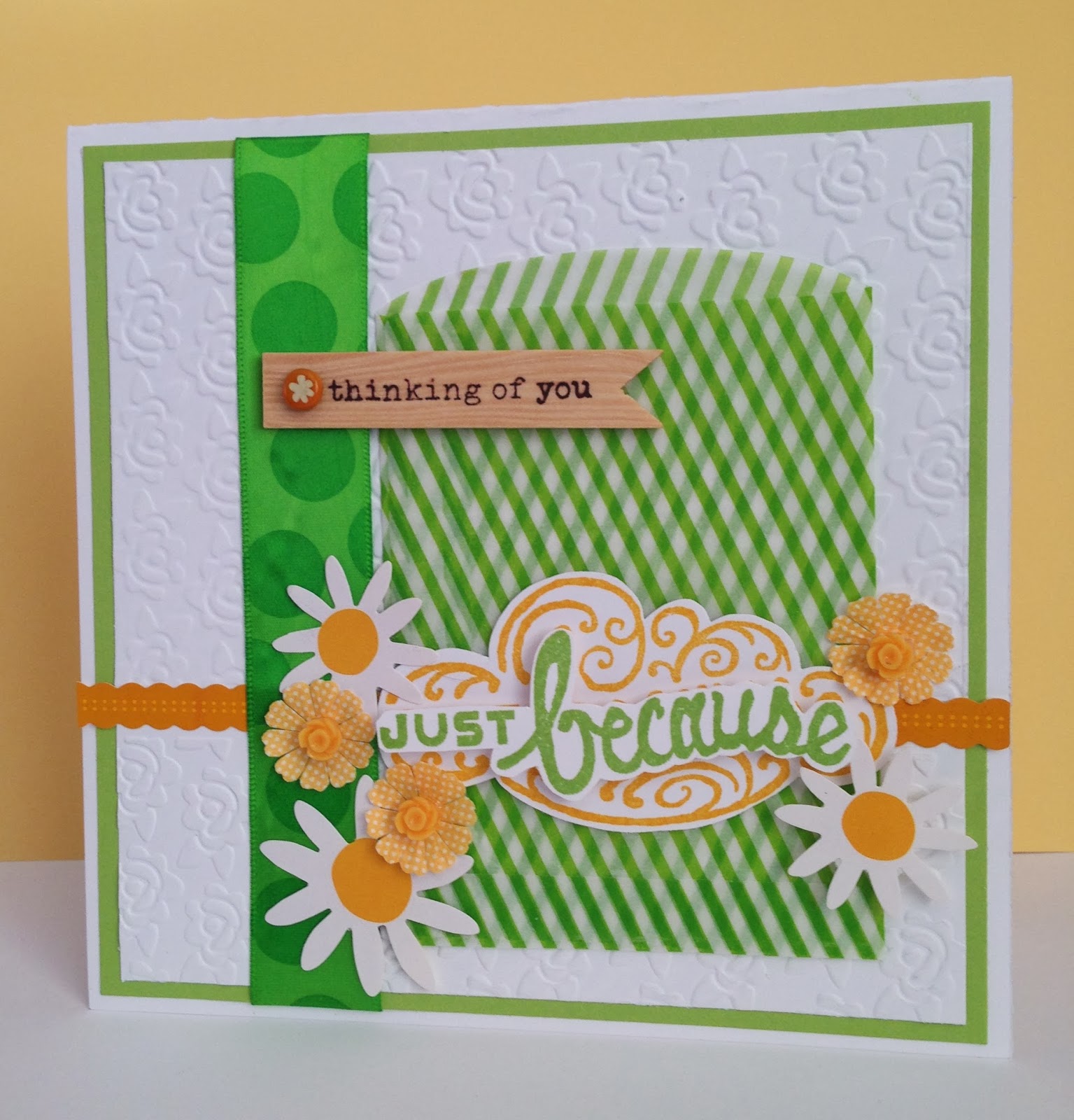 I think this suited the Dynamic Duos "Bold & Cheery" week just right - even if I do say so myself.


Here are the details about the Cloud Nine Cardmaking Kit that I mentioned a couple days ago.  It's only available until the end of this month.  If you purchase $35 in product you're eligible to buy this kit for only $15.
Posted by Patti at 3:52 PM No comments:

LOL, have you ever done this before? Rush to make a card and then realize you made it in the wrong direction?  It's been years since the last time I did this until a couple months ago when I was trying to meet a challenge deadline - which I did not manage to do. 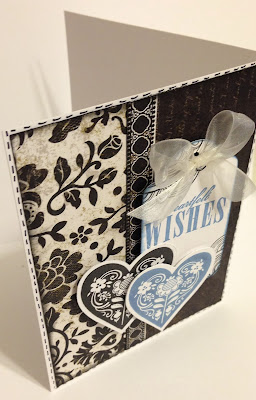 At least it can be fixed quick, by just cutting it off and sticking it on another card base.  The main reason I wanted to show you this is because this beautiful Close to My Heart For Always paper retires at the end of this month.  The heart stamps were from the Nov 2013  Stamp of the Month so no longer available.  But the frame stamp I used as a flourish and the sentiment are still available, if you're interested leave a comment and I'll look them up real quick. 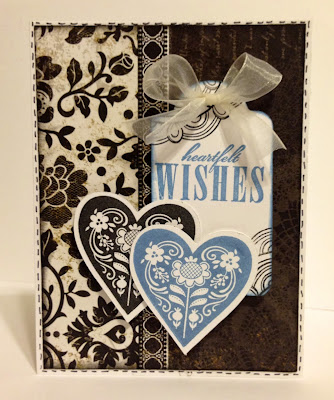 Ahhhh what a relief it is!!  I have been almost driven to tears the last couple months with intermittent internet connection.  It always seemed to happen at horrible times i.e. when I was trying to post the post below (LAST WEEK!!) and I lost connection.  Luckily I had the soundness of mind to copy and past it to a document so I wouldn't have to remember and type it all again.  My dear hubby brought home a brand new fancy schmancy router today and all is well with ALL my wireless devices and computer…another big sigh of relief.

I know it's silly to get upset about internet connection and I feel guilty being so reliant upon it but time is precious and when you spend hours trying to figure something out (when you'd rather be crafting) to no avail, well….it made me sad and mad and everything in between.

Oh ya, one of the other problem times is when it went out in the middle of me finishing my online driving school test….arrrgh. But I'm not going to get into the details of why I was doing that lol.


Yes, of course Jan. 1 we had the pleasure of ringing in 2014 but it is also the day that the Cloud 9 kit became available for only $15 with just a $35 purchase!   If you order from my site during the month of January you will receive a free little stamp for any size order (I send you no matter what) and the chance to receive $25 in product credit!!  Just go online and in the lower right corner join the "Blogger Friends" gathering then place your order- you'll be entered in a drawing for hostess credit if there is at least $150 in orders.  If you place a qualifying order and subsequently purchase Cloud 9 I will send you a free Spring/Summer idea book.

I always get excited about our great Close to My Heart specials but this one was  a little different for me.  When I first saw the colors and stamps I thought oh a mustache. . .  nice-trendy, the colors and style are a little out of the box for me but I need to stretch from time to time.

Then I made the cards, they're so much neater "in person" than in photos they were also fun and easy.  I followed the instructions that are included with the kit but I also stamped tone on tone using One Way Borders and embossed a few of the pieces with my Cuttlebug.  I also used One Way Borders to accent the envelopes. 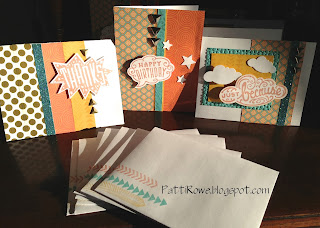 They're so fun to make and the cutting guide/instructions/stamps can be used over and over with other papers. This is the left over scraps I had from the kit - 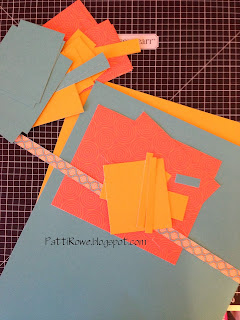 Keep in mind you get a full size roll of Gold Polka Dot Washi Tape & Lagoon Shimmer trim!  A little tip when using Shimmer Trim, to make it easier to remove the backing just keep a little bit of backing longer than your trim so you don't have to peel it every time.  It's hard to see in this picture but it really helps if you happen to you have fumble fingers like me. 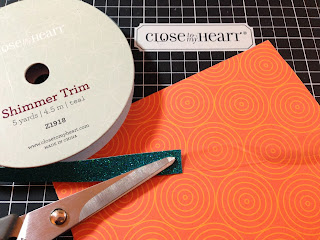 I remembered a couple photos that my kids posted on FB lately that I thought would be great for a layout using the mustache stamp, and low & behold my grandson's Woody costume was the perfect colors for the Cloud 9 kit.  All I added was White Daisy card stock, EVERYTHING else was leftover from the kit, and I used ALL of them! But I still have quite a bit of extra washi tape and shimmer trim. 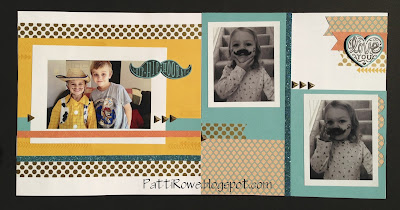 Quite honestly I don't get the mustache thing, all I know is they're hot and cute and popping up everywhere . . . . even on my grand babies!! I'm so glad Close to My Heart is always rising to the occasion to provide us the latest and greatest :o)

Here's one more card that I made this weekend with Cloud 9 and one of my old card supply packets that I still had laying around from a few months ago. 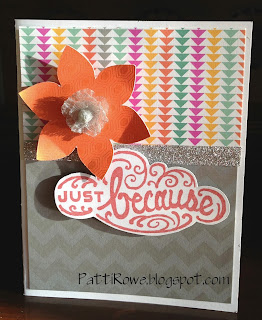 And last but not least a recap of what is included in Cloud 9:

You can create 10 adorable cards (2 each of 5 designs) using the materials in this exclusive cardmaking kit and some basic supplies. The Cloud Nine cardmaking kit offers you a sneak peek at 3 new Spring/Summer2014 Idea Book products: gold polka-dot washi tape, teal Shimmer trim, and Durables triangle studs! It also includes a new, exclusive D-size stamp set and an instructional guide for creating 10 cards.
Posted by Patti at 8:34 PM 2 comments: Patti
Planning & sharing scrapbooking and other paper crafts projects is so much fun and a huge source of joy and stress relief! 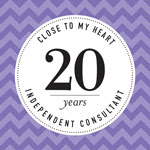 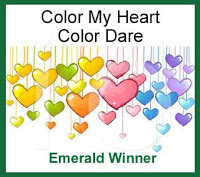